Need to Know the Law

Focus on Smartphone Use and Texting While Driving

Distracted driving may involve a host of behaviors that draw the attention of the driver from the road. In addition to cell phone use and texting, they include, among others, talking to other passengers, watching video, changing the radio station, using a GPS, drowsiness, and looking at the scenery. However, with the exception of cell phone use and texting, these behaviors are difficult if not impossible to control through laws or regulation and even more difficult to enforce because law enforcement officers are hard-pressed to prove distracted behavior when stopping a driver. Cell phone use and texting are easier to enforce because the behavior is visible to the officer. Since use of smartphones and texting are the most dangerous forms of distracted driving, and because it is a visible behavior, the focus of lawmakers in attempting to reduce distracted driving has been laws that restrict the use of smartphones and texting while driving.  Laws regulating traffic safety are, fundamentally, a state responsibility

The Federal Response to Distracted Driving

While traffic safety laws are a state responsibility, the federal government does have prohibitions of cell phone use and texting while driving for certain categories of drivers. Since 2009 an Executive Order by the President “prohibits federal employees, a workforce of approximately four million people from text messaging while driving on official Government business or while using government-supplied equipment while driving at any other time.” (see J.D. Catherine Chase, above) U.S. State and Federal Laws Targeting Distracted Driving, Association for the Advancement of Automotive Medicine, 2014).

There are also federal rules by the Federal Motor Carrier Safety Administration on Commercial Motor Vehicles (CMVs). According to FMCSA, the, “This rulemaking restricts a CMV (commercial motor vehicle) driver from holding a mobile device to make a call, or dialing by pressing more than a single button. CMV drivers who use a mobile phone while driving can only use a hands-free phone located in close proximity.”  https://www.fmcsa.dot.gov/driver-safety/distracted-driving/mobile-phone-restrictions-fact-sheet

Other than these, there are no national (federal) laws regulating distracted driving. The federal role in curbing smartphone use and texting while driving has been mostly: a) to support research of the effects of smartphone use and texting; b) data collection; c) financial support and incentives of state/local level efforts to enact legislation and education programs; and d) to develop national education campaigns together with a host of community partners across the country.

The main differences between the laws among the states are:

The Governors Highway Safety Association (GHSA), the National Conference of State Legislators (NCSL) and the Insurance Institute for Highway Safety (IIHS) compiled smartphone and texting while driving laws by state. 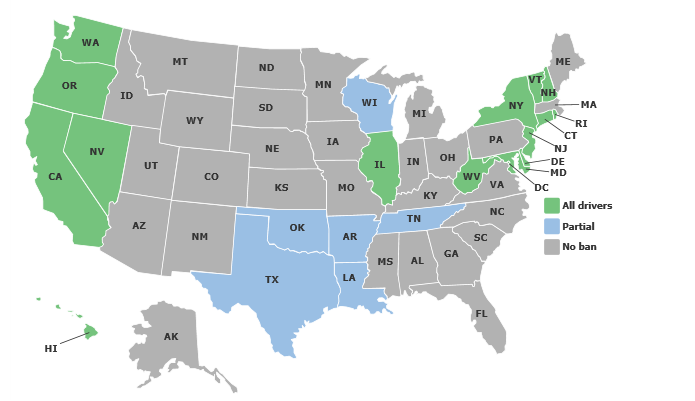 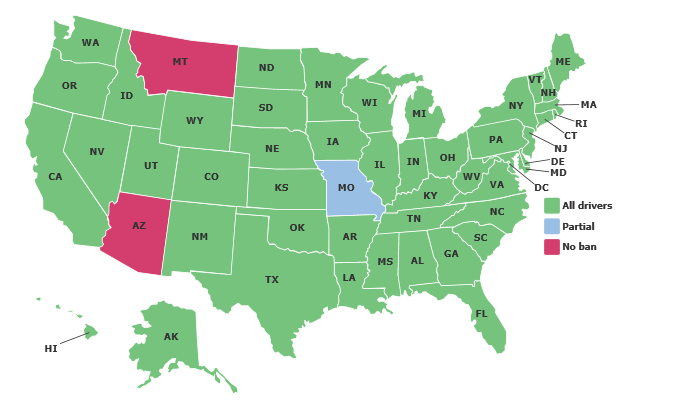 Many localities have enacted their own bans on cellphones or text messaging. In some but not all states, local jurisdictions need specific statutory authority to do so. In addition, most school bus drivers are banned from texting and using hand-held cellphones by state code, regulation or school district policy.

According to various sources, the strictest texting ban laws are in:

State safety information on each state can be obtained through the state highway safety office in each state. https://www.ghsa.org/about/shsos

The recent data on distracted driving, smartphone use, and texting while driving point to the effectiveness of Graduated Driver Licensing (GDL) is various states as a tool to reduce smartphone use and texting while driving among youth. Basically, GDL addresses the issue of inexperience and maturity of the young driver. According to the Governors Highway Safety Association, Graduated Driver Licensing (GDL) programs allow young drivers to safely gain driving experience before obtaining full driving privileges. Most programs include three stages:

The GDL sets minimum age requirement for each stage, time the driver must be in each stage and restrictions in each stage (e.g., driving at night for youth under 16)